The world’s largest S’more once weighed in at 267 Lbs – that was until the team at DCF made history with the new World Record, baking and constructing a monstrous creation at a whooping 748lbs!!!!!

Over the last two weeks Toronto was home to thousands of elite athletes for the 2015 Pan Am Games. As part of the closing ceremony celebrations, DCf was asked to participate and create a memorable experience for this night. The DCF Team went into overdrive as they gave it their all, producing hundreds of pounds worth of homemade graham crackers, marshmallow, and giant slabs of pure Belgian milk chocolate in order to create this giant feat!

After all of their hard work, the team, including 2 of our amazing Pastry Chefs Andreja and Daniella, along with Jeff and Ali, headed down to the athletes village to begin preparation for the exciting opportunity! There were over 30 excited Pan Am chefs assisting the DCF team with keeping records of weights and helping with the assembly, so we managed to finish in less than two hours, just on time for the massive hungry athletes, trainers, doctors, and families ,coming back to celebrate the closing ceremonies.  Feeding 4,000 would normally be a task in itself- but this crowd was so excited they helped put a massive dent into the smores within an hour! The tasty graham, chewy marshmallow and unbelievable chocolate were too irresistible to miss out on, and of course everyone wanted a selfie photo op! We even topped it with an edible Canadian Flag, Pan Am logo and Toronto Logo to keep the spirit alive! We were so proud of out teams accomplishments and are so very thankful to the Chefs and Pan Am team that gave us the opportunity and challenge! We loved working with everyone and cannot wait for the next adventure- and record to break! Our hard work definitely paid off as seeing the smiles on everyones faces was DCF’s Gold medal forsure!!

See below for some amazing images and time lapse video! 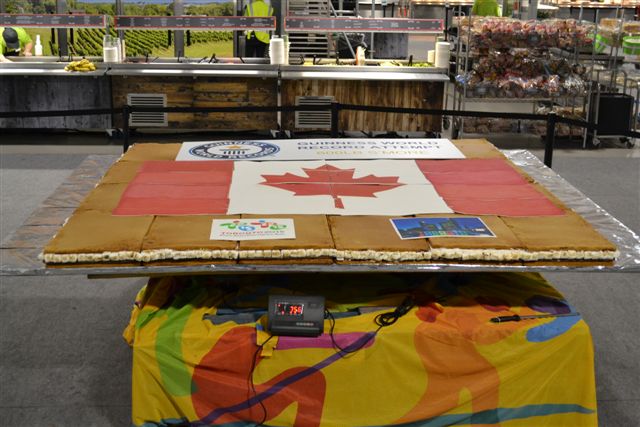